Picked up the 'Gray Goose' last night from having some work done on her.  Installed the radiator, fuel cells and the intercooler.  Nice work done!  Thanks Taylor!

Engine coming out next and going to Todd Maschmeier's for a little more power! 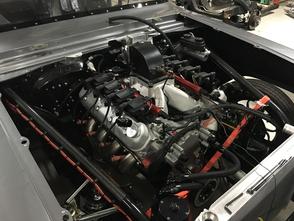 Many of you may recognize this car.  Last year my parents purchased the car.  It had an 800 CI Reher Morrison engine in it.   We turned it into a drag radial car and took it racing a couple of times.  We had a great time with it!

Over the winter, my parents decided to sell the car.  That was my all time dream car....so I decided to  purchase it from them as a roller.  And so the project began....

We took out the 800 CI power plant.  It is being replaced with an improved Red Dragon engine.  The new engine will be 416 CI.  It will have Callies ultra billet crank, Callies ultra rods, JE pistons, Trick Flow 245 heads, Super Victor intake manifold, Lil Jon's Motorsports cam shaft, twin Precision 7675 turbos.  It will have a 2 speed 400 rossler transmission, menscer shocks and a new carbon fiber bubble hood from Unlimited Products.

The car has been undergoing some renovations to allow it to handle the turbos.

We plan to participate in many races this year.  We will update this site with news and photos of the progress.  Stay tuned for updates!  Should be one heck of  racing season!